Finally! After over a year working on both the British and the French armies for Lasalle now these troops have finally been inaugurated (together with the new gaming mat, that also had yet to see serious action). Today my good friend Bodo came over from Stuttgart, and we spent a very anjoyable afternoon battling for the “crossroads” – the Lasalle scenario that we had chosen by throwing a dice.

As you can see from the picture above, the landscape was a road connecting the long edges of our 1,5m * 2,5m table and two slightly offset roads running from it to both short edges. Where the roads met, four build-up-areas formed a small village. Along one of the roads was a corn field (at the right side of the picture) counting as rough ground, and just outside the picture a little wood. The ploughed fields are just for decoration and were treated as even ground.

The French (played by Bodo) had deployed first and thus had the first move. They started just with their core army, the heavy cavlary was not yet present – and since the cavalry commander sincerily lacked vigor there was a good chance they would not leave their breakfast for some time to come. Consequently, for the French it seemed a wise decision to fortify their position and go for the village. 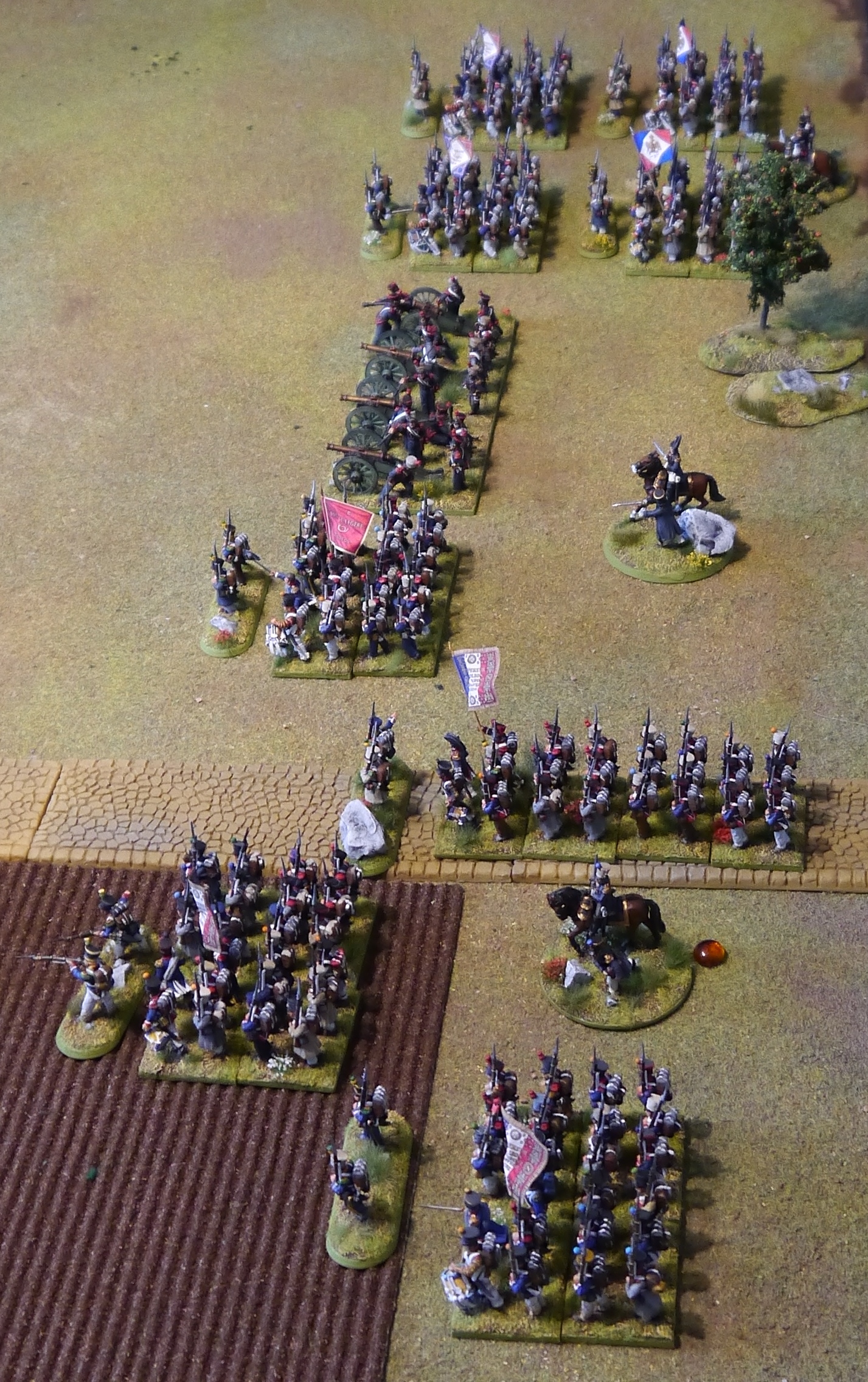 The British (played by me) were rather more numerous, having both their core army and a strong support of black Brunswickers (at the top of the picture, positioned on the British left). 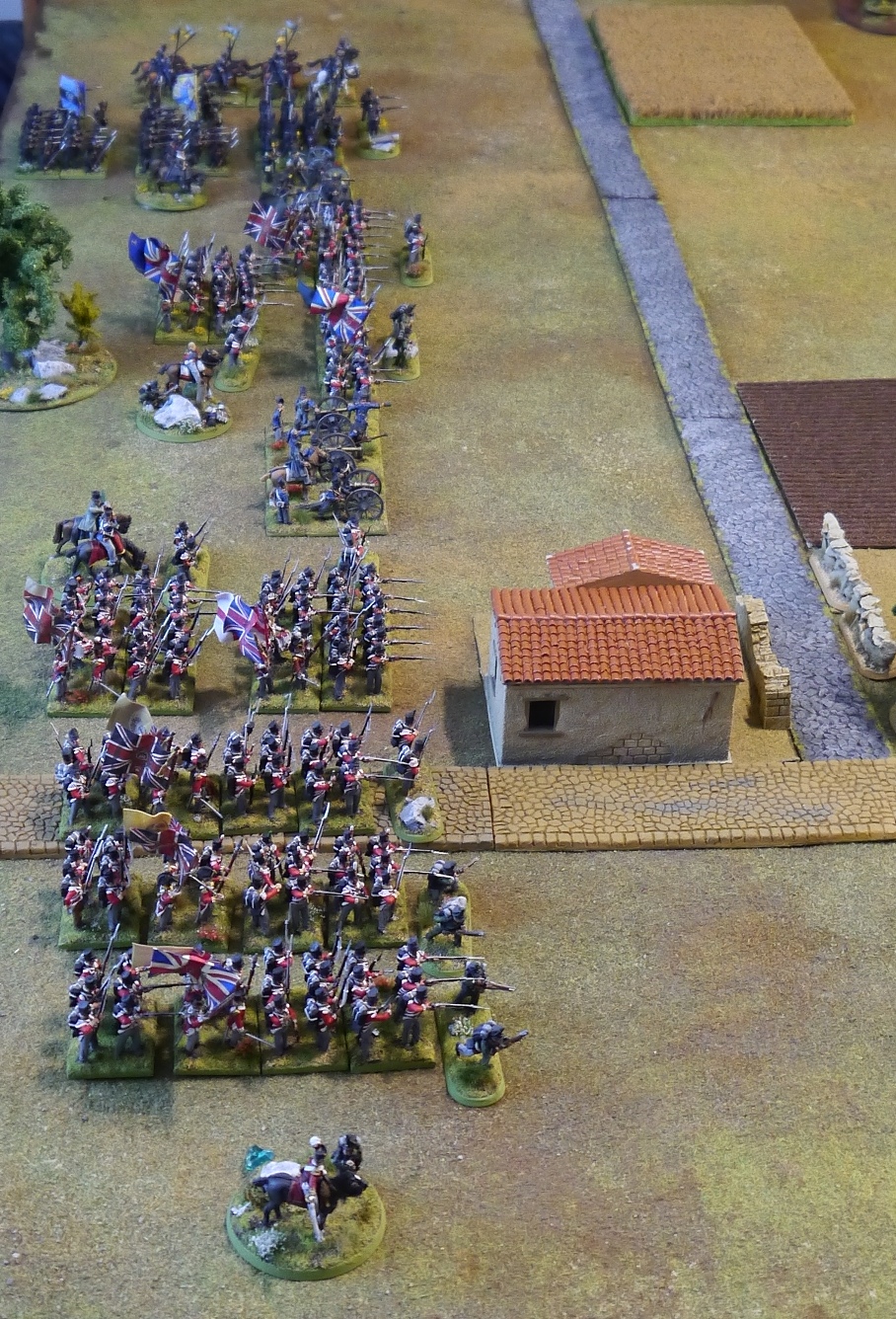 Thus they decided to attack while the French were waiting for reinforcements, sending six batallions of infantry to the village on the British right and the Brunswickers forward. 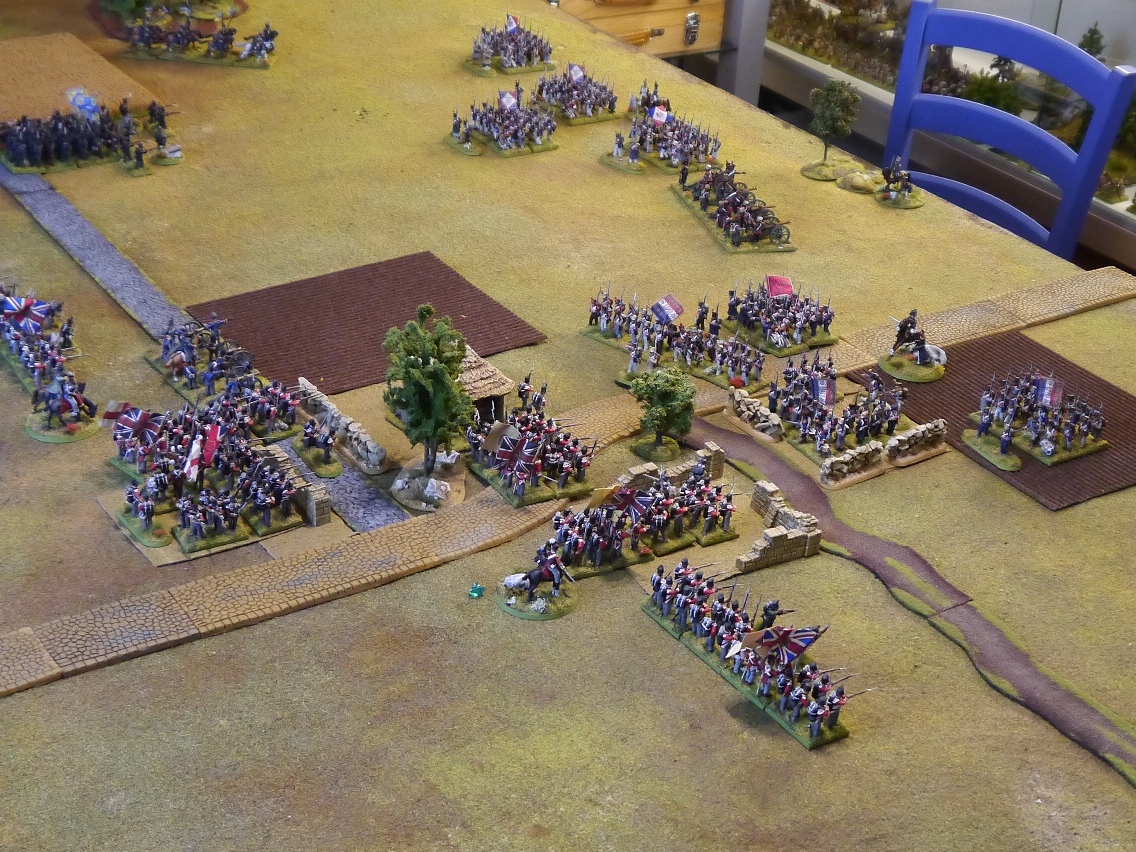 After an at first inconclusive artillery duell fought in the centre the French battery was forced to limber, motivating the Brunswickers to attack the French right flank. Meanwhile, in the village a desperate run for the buildings had began, with four French and six British batallions racing for the best starting positions for the coming street-fight. 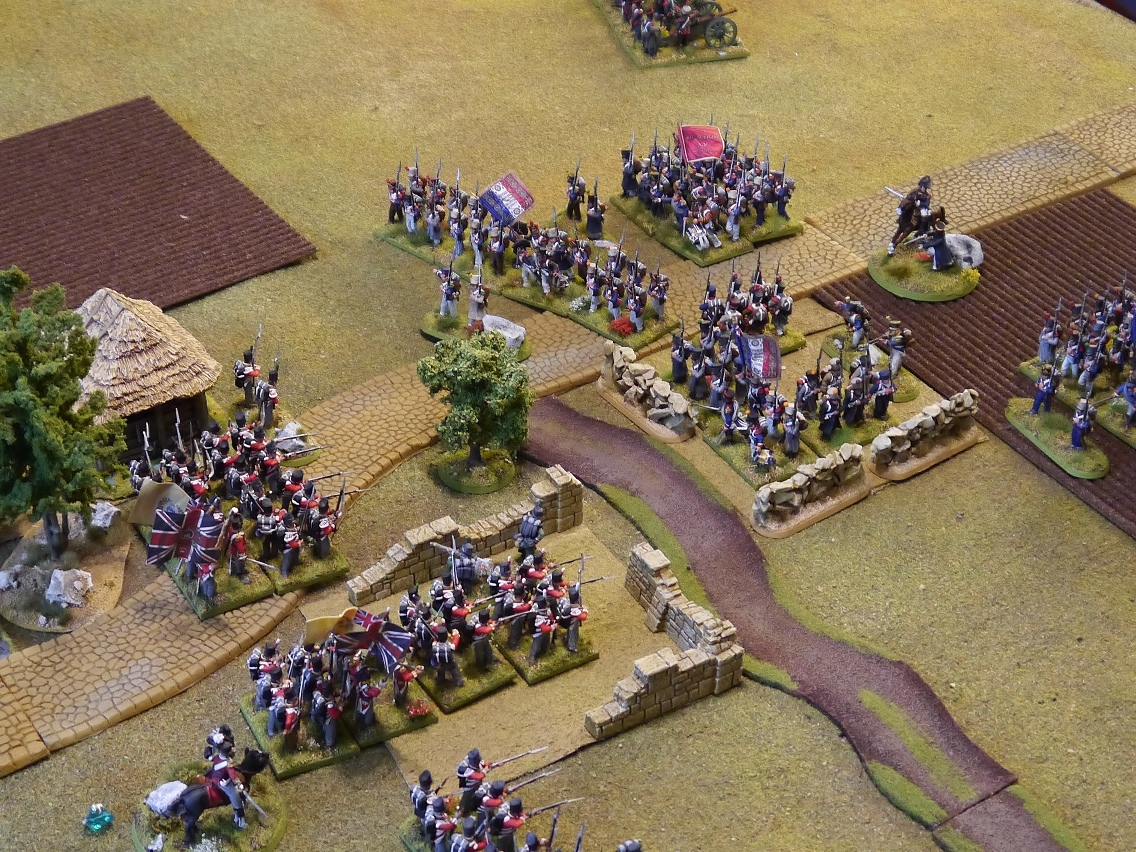 The limbered French artillery made the best of their forced mobility and swept over the battlefield to recieve the Brunswick attack with a warm wellcome. It was only due to some rather misfortunate dice rolls (probably wet pouder…) that the Brunswick cavalry still had the time to form up… 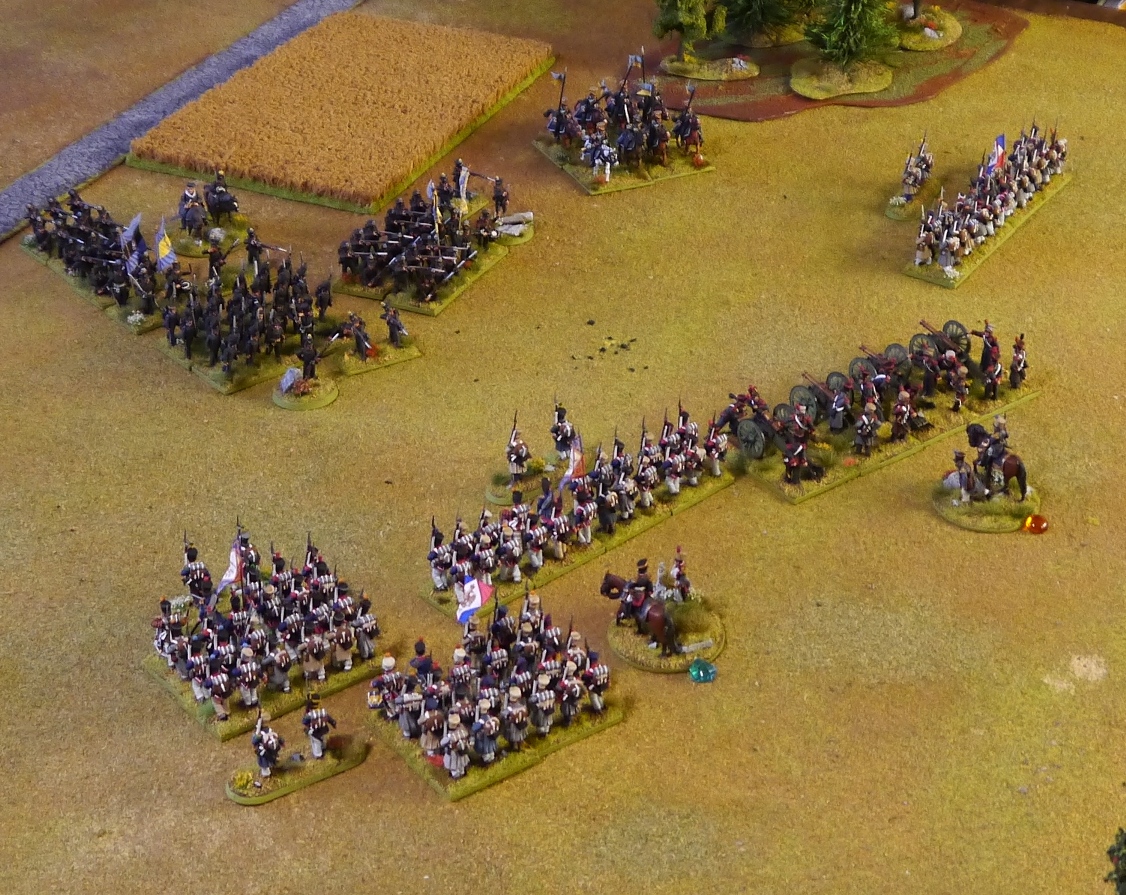 ..and engage (sorry for the blurred picture, my hand was trembling because of the shaking ground, beaten by the thundering hooves of the ferocious Brunswick horses). 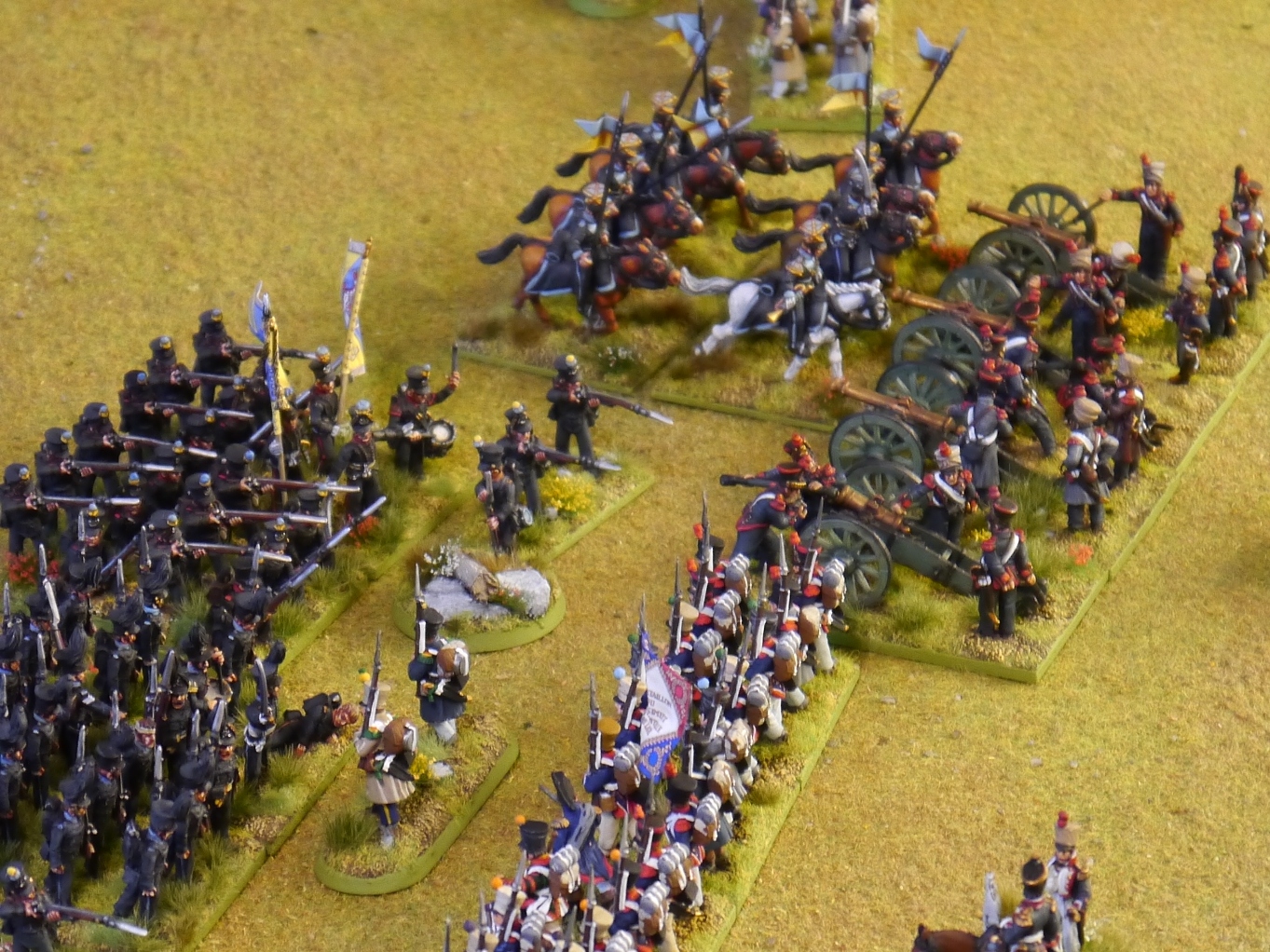 The cavalry was recieved by a fierce cannonade that crippled the unit, rendering it useless for the rest of the game. But it had reached its goal, riding over the cannons and sending the French battery to oblivion.

Meanwhile in the village… 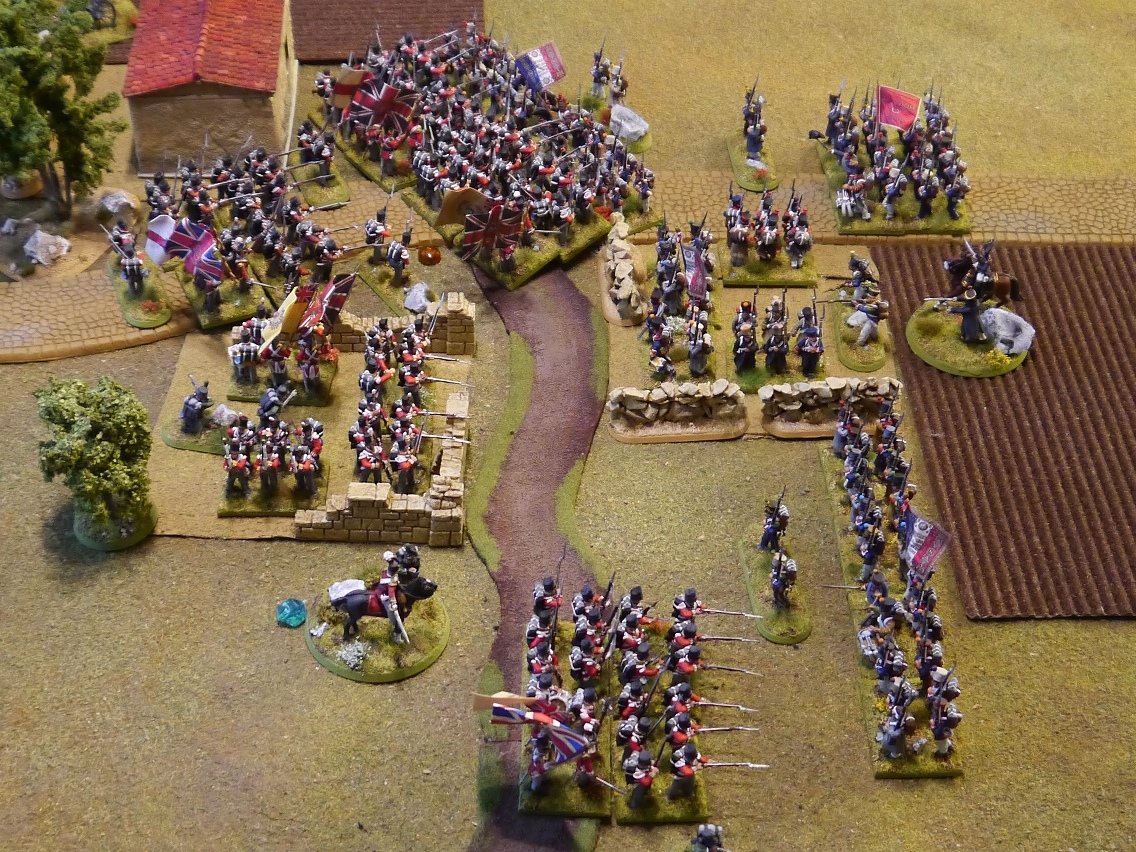 …the battalions had come to grips – and rather tight ones at that.

While the first fight saw a French batallion surrendering to the superiour numbers of the British, soon more French joined in, blocking the retreat and thus annihilating one of the British “Buff”-batallions. 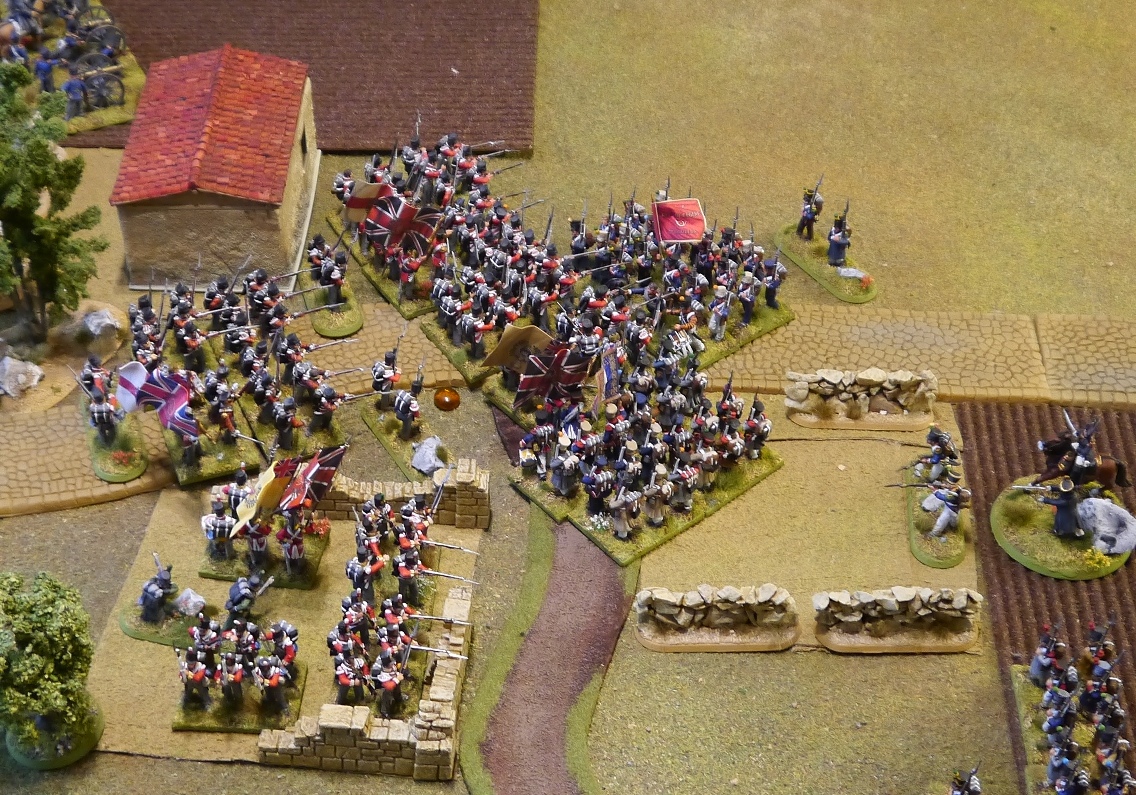 Making the best of the lack of French firepower, the British batteries… 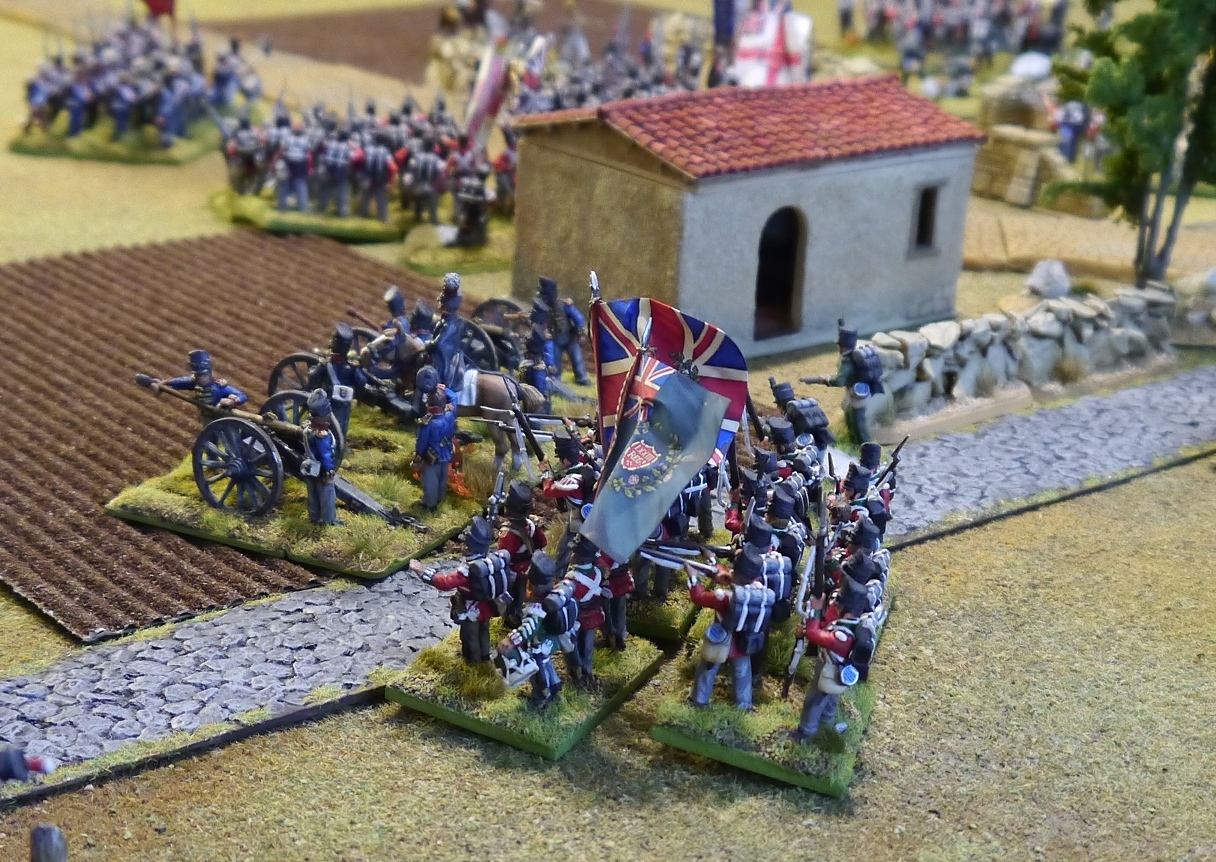 …continued to pepper the French centre, preparing the way for the Brunswick infantry which finally engaged the weakened units. 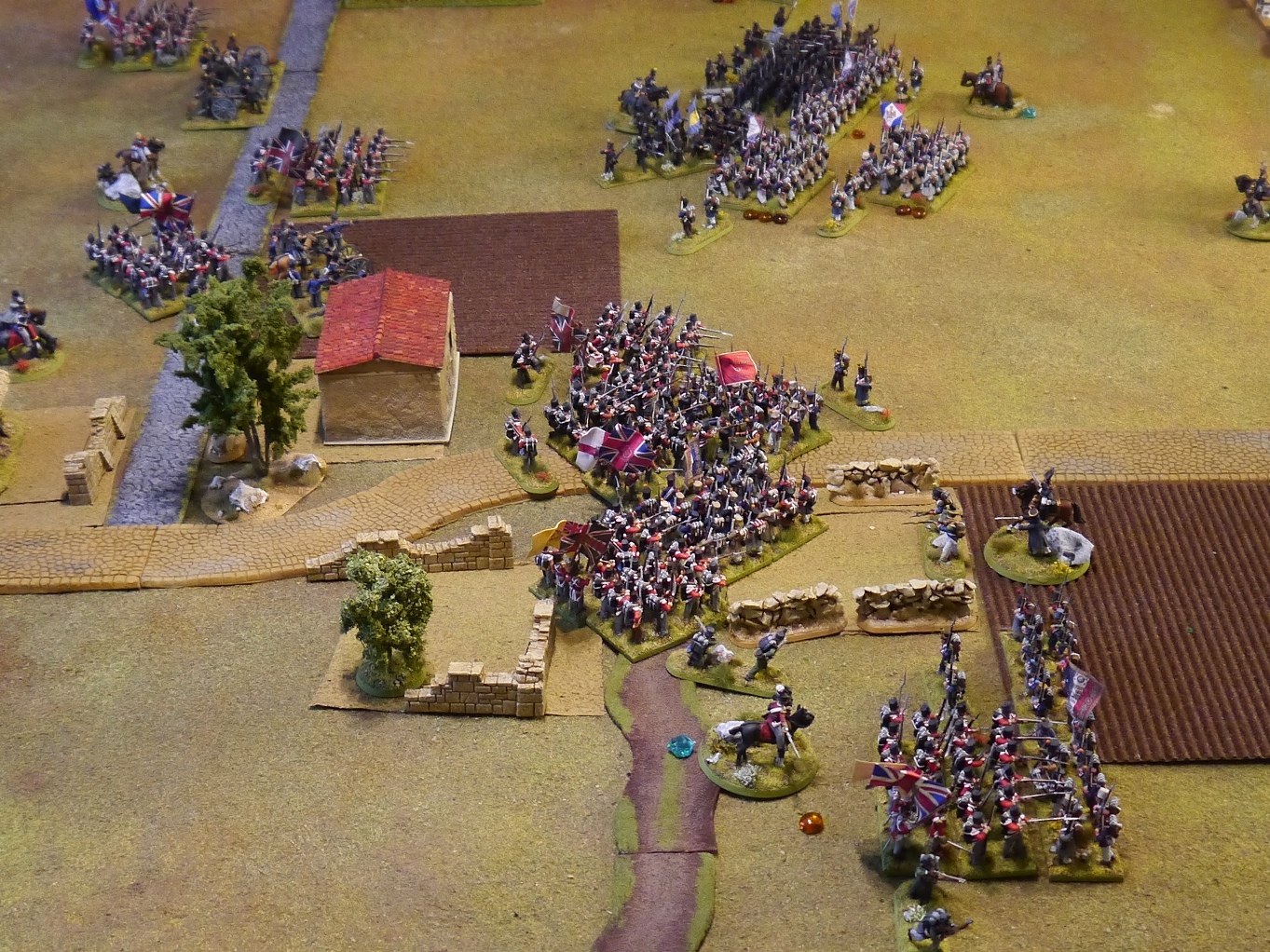 It was then that the lazy French cavalry commander finally swallowed the last frog’s leg and gave the signal for the attack. It could not have been better timed. The arriving heavy cavalry… 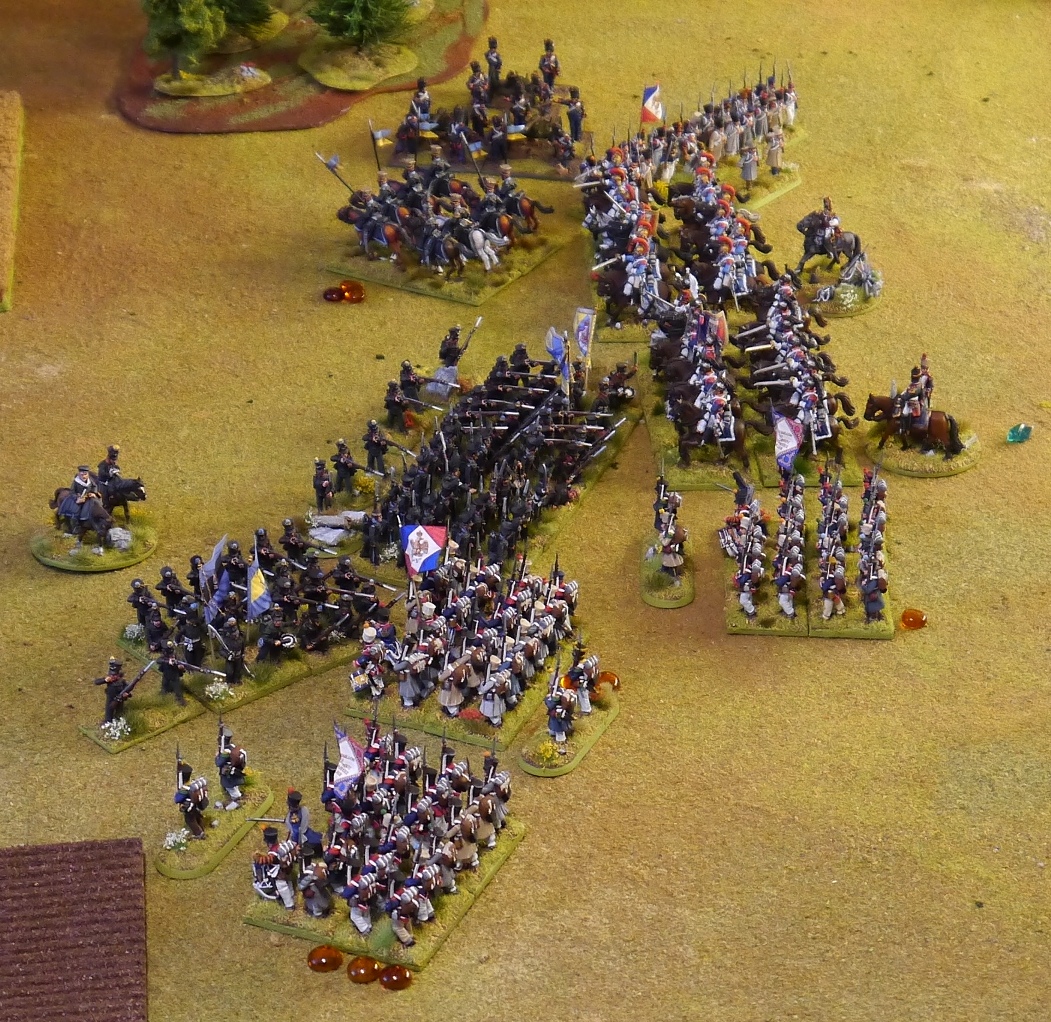 …mercilessly clashed on the Brunsickers (who failed in their attempt to form a square) and drove their battered cavalry off and away. 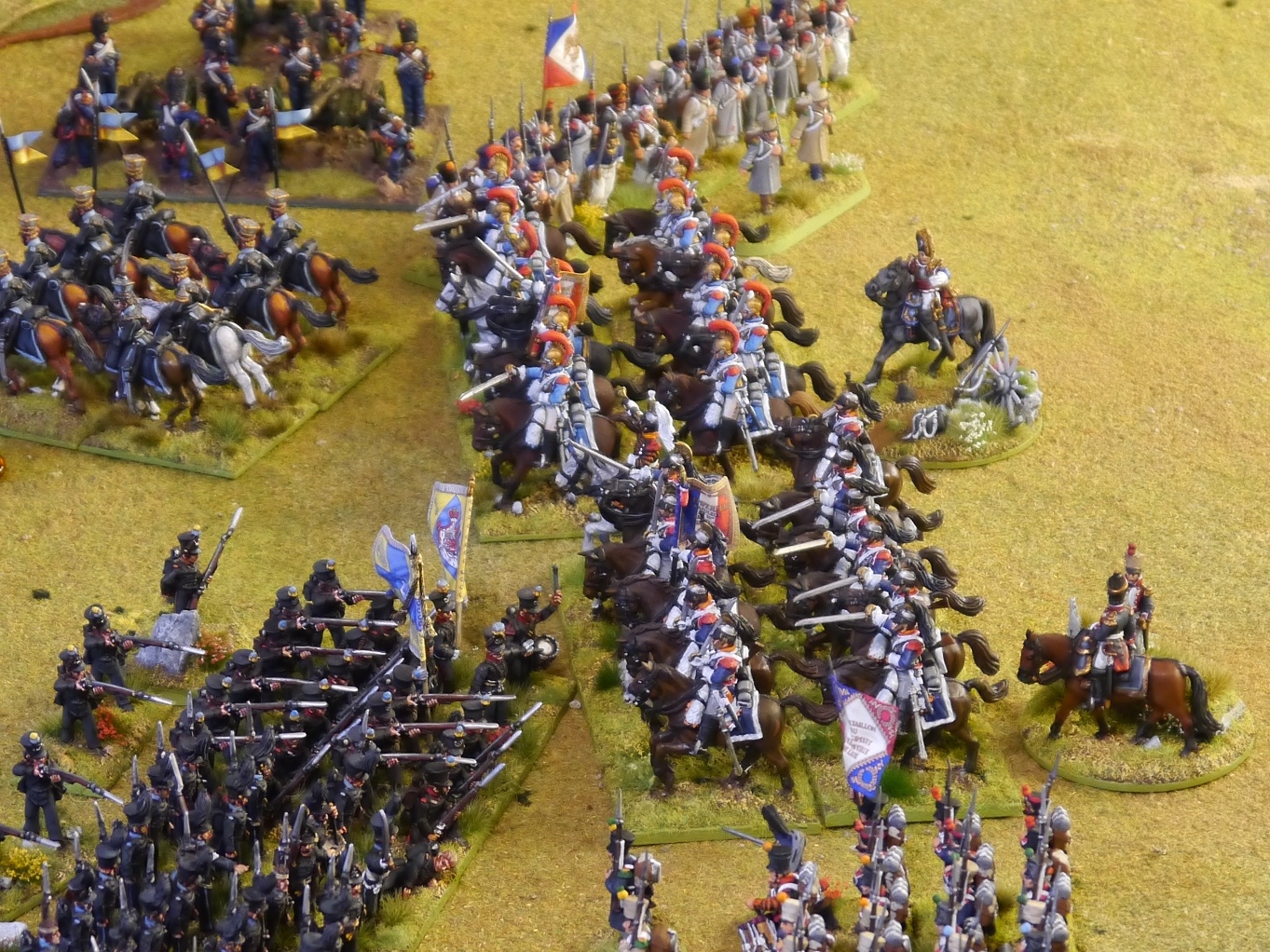 With one of the batallions vanishing in the thunderous attack and another one just holding out with its last will to stand, it started to look rather bleak for the British.

But luckily on their right flank the numbers had finally told and the village was conquered, giving the room for mounting another attack on the centre. 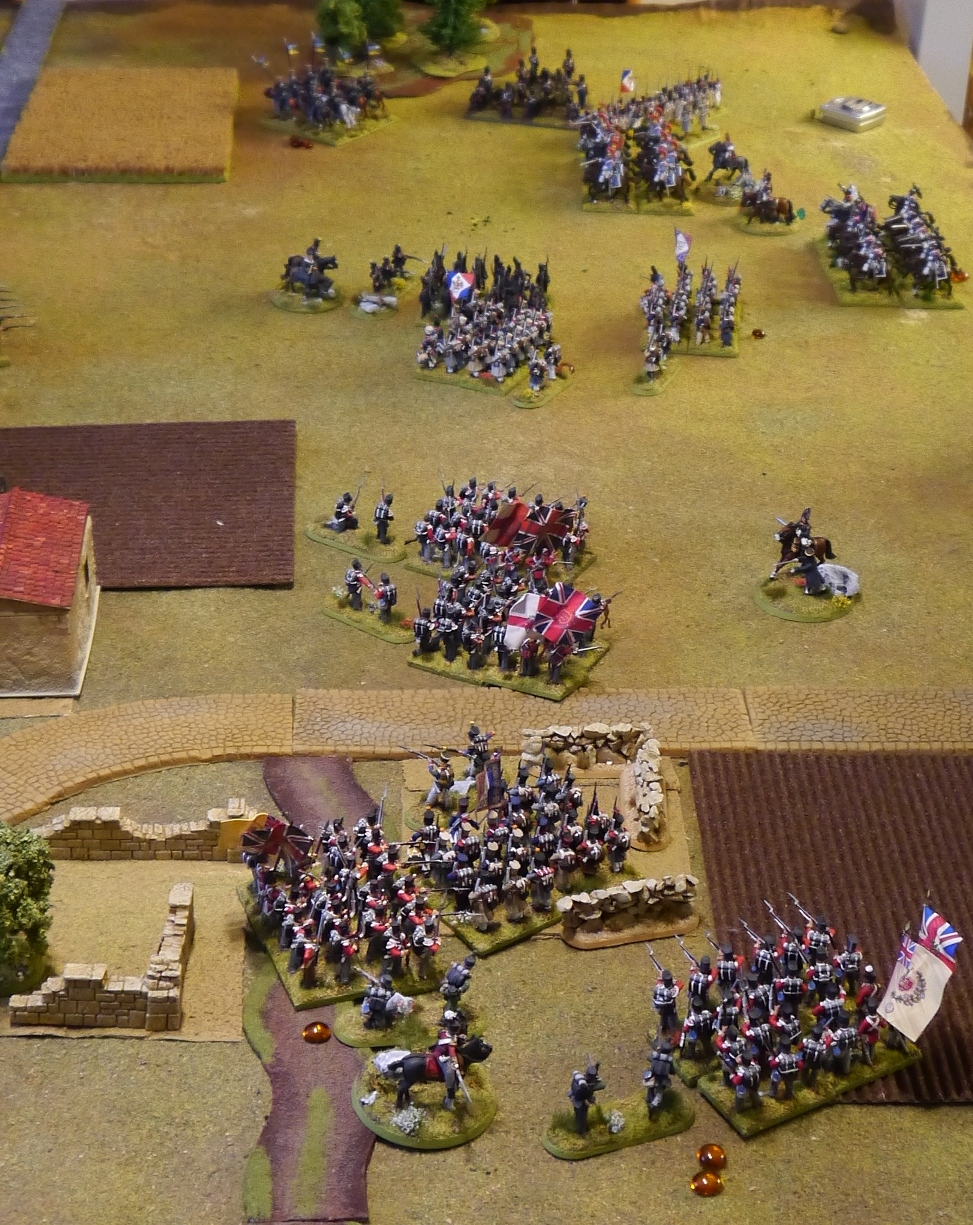 This dealt a heavy blow to French morale, which already had been shaken by the severe losses. The British attack on the left flank came to an end with the Brunswickers all but obliterated by the heavy cavalry in a powerfull cooperation with the battered, but hardy French veteran infantry. But with the British centre nearly untouched… 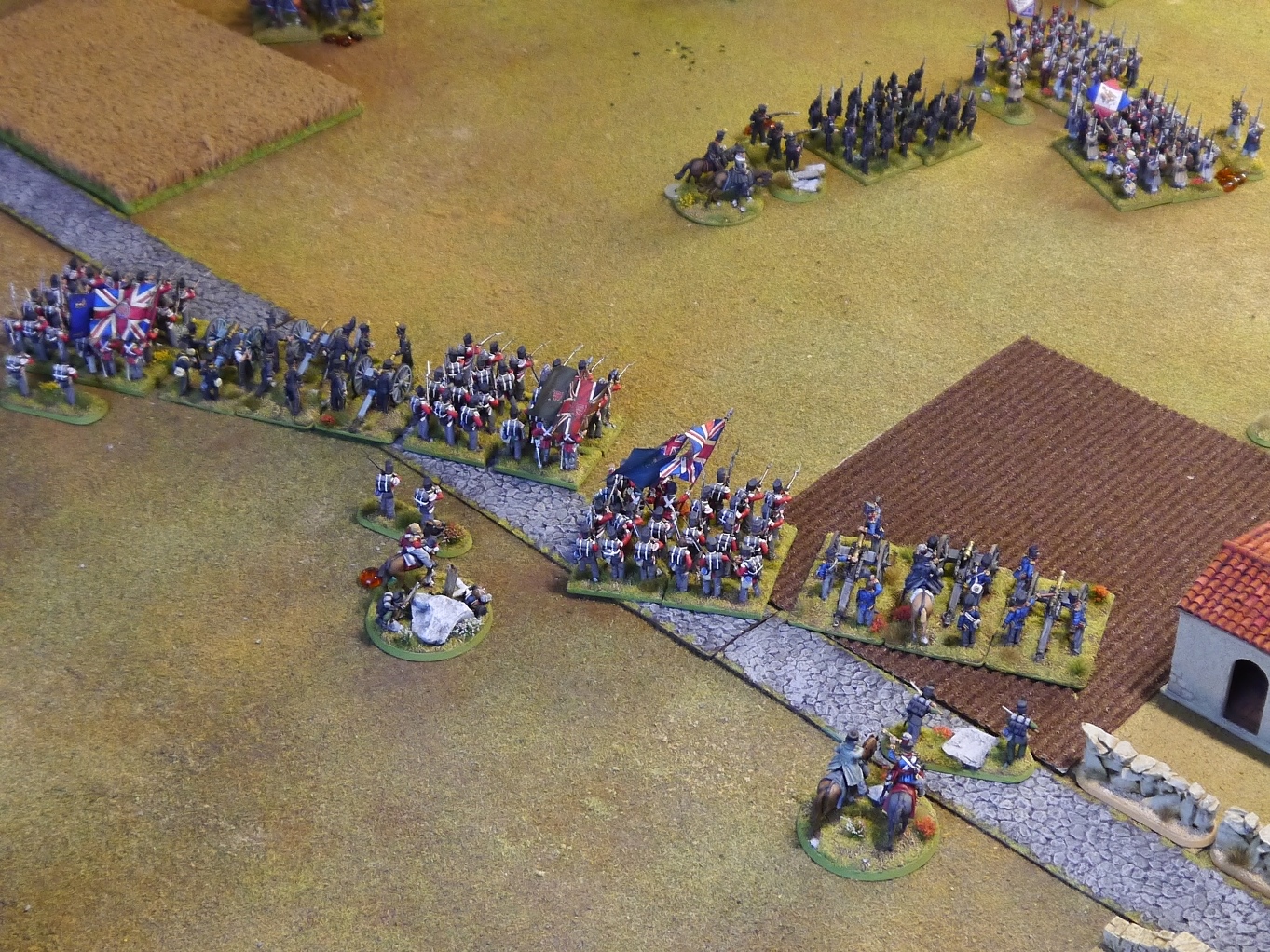 …this army was far from breaking. The same could not be said for the French, who decided at their first morale test that it would be wiser to fight another day, thus leaving the field to the British.

Certainly the fate of the French was sealed by the late arrival of their reserves. But this was at first not as obvious as it seems in retrospect. In fact the game was full of suspense and could at several points have taken a rather different path. Thus it was highly enjoyable, and I thank Bodo very much for not only letting me win (always a nice gesture when the host is inaugurating a newly painted army) but also for this great game!

For me it once again proved that Lasalle is one of the best wargame-rules around. With its elegant game-flow and its simple but coherent mechanisms it lets you concentrate on the battlefield more than on the rulebook and it produces both credible results and interesting, suspense-packed games. Thus with these two armies now in the field, I’m going to add each a second brigade as reinforcements: Heavy cavalry for the British and elite infantry for the French. But more of this some other time.

Have a nice evening and a nice Sunday, all the best,
Tobi

Well well well, this took longer than I had expected. BUT now the Brunswickers as first addiditional brigade for my Lasalle British army are finally completed.

They consist of two line battlalions (which were missing until today), an elite batallion or Leib-Batallion, artillery, cavalry (originally Hussars, but I liked the Uhlans better), artillery, two extra skirmisher bases and of course the command. 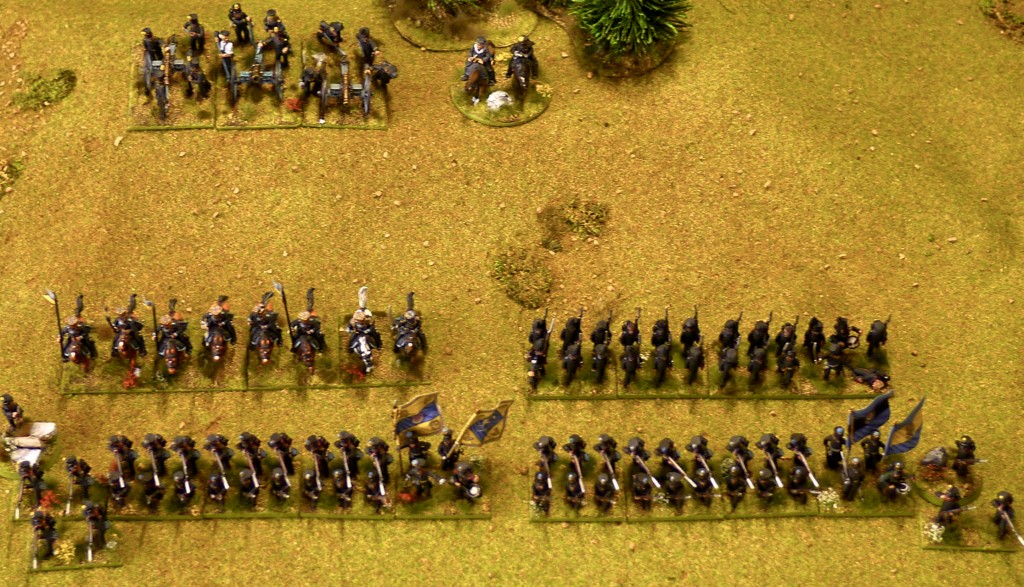 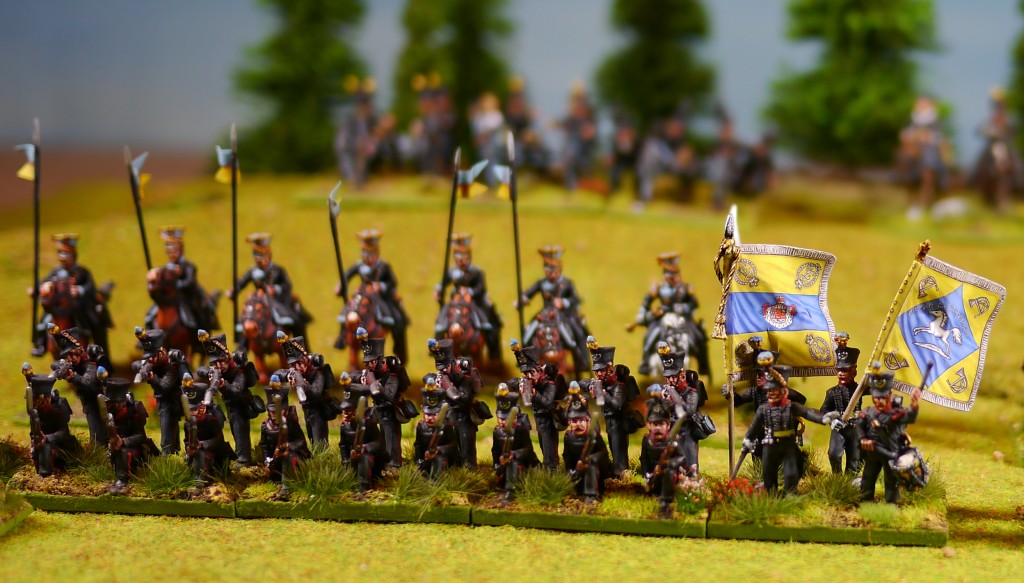 …and the second line batallion under Major von Strombeck. 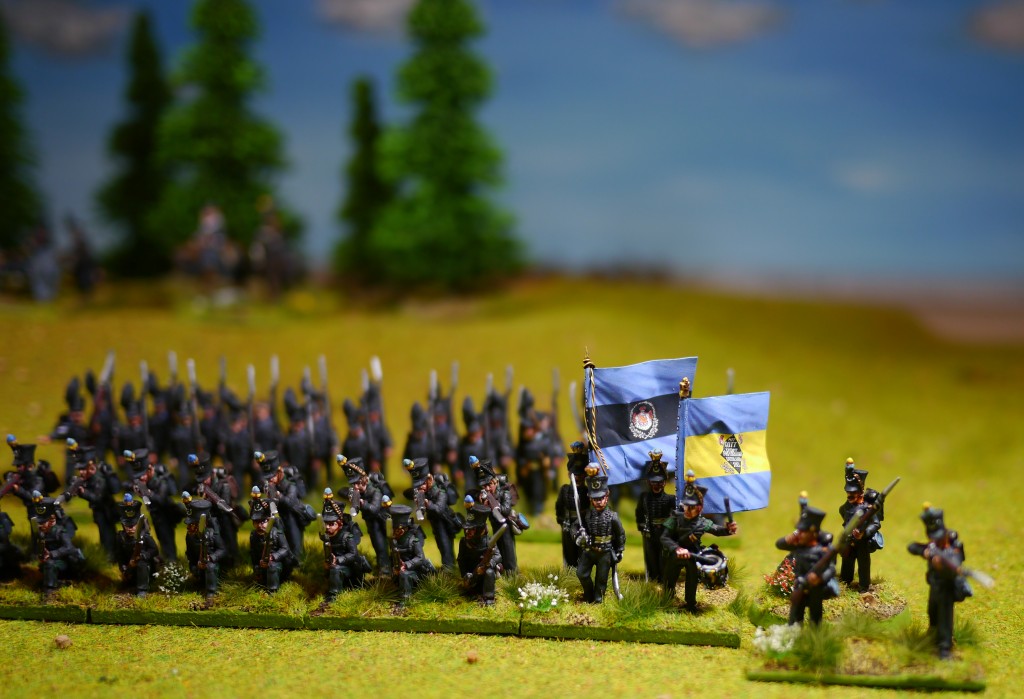 The figures are a wellcome change from the omnipresent march-attack – pose. All other figures are known to you from my other posts (just select “Brunswick” as category selection), so I’m only showing the command and artillery … 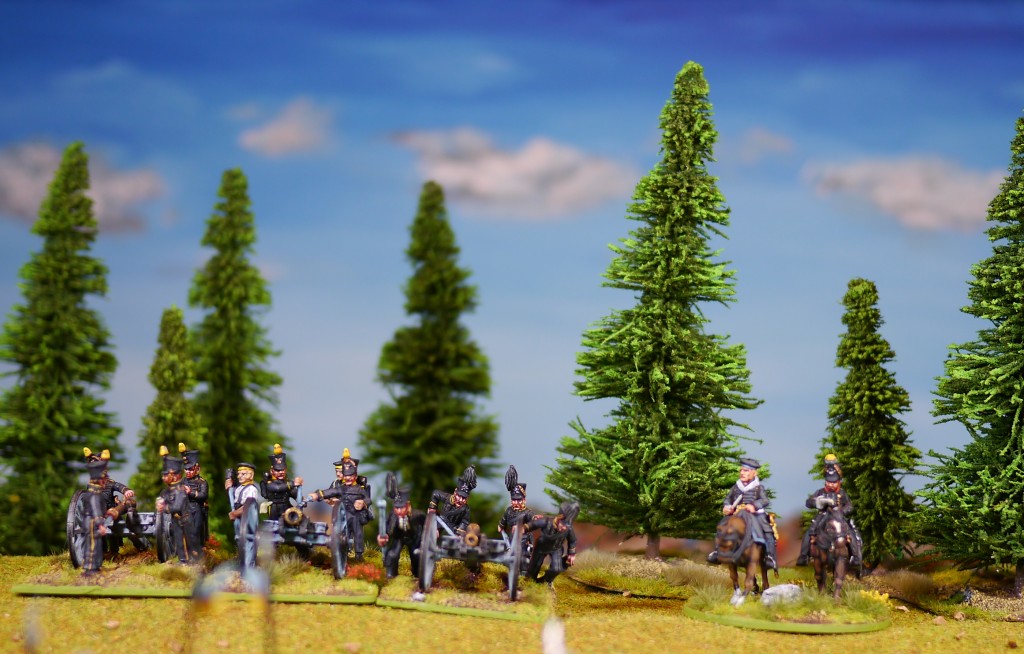 … and the the Uhlan-command (beautiful figures – I may say so, because I did not paint the Uhlans myself). 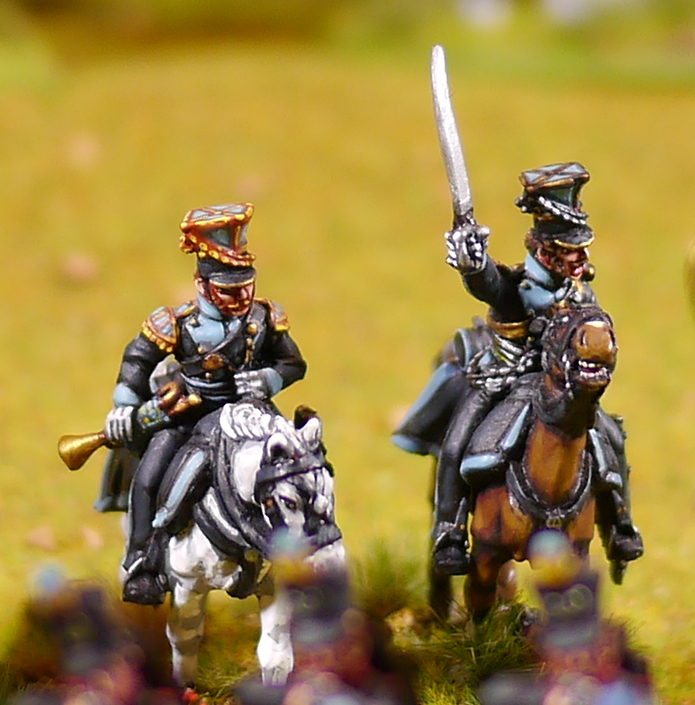 There will be two additional selections for the British army – as well light cavalry as heavy cavalry. I really have to have Scottish Greys… But I doubt I will field them right away. First I will finish the French, and then I will fight a few battles. How I’m looking forward to this…

Have a nice day and thanks for your visit,

I’m rather glad that writing more blog-entries wasn’t one of my resolutions for the new year, because then I would have already broken it. With the other resolutions I’m on a good way, and I’m happy to report I didn’t buy a single figure (painted or unpainted) until now. But I have made good use of the limited hobby time I have nowadays, and here I proudly present “the Black Duke” of Brunswick as well as his Leib-battalion. 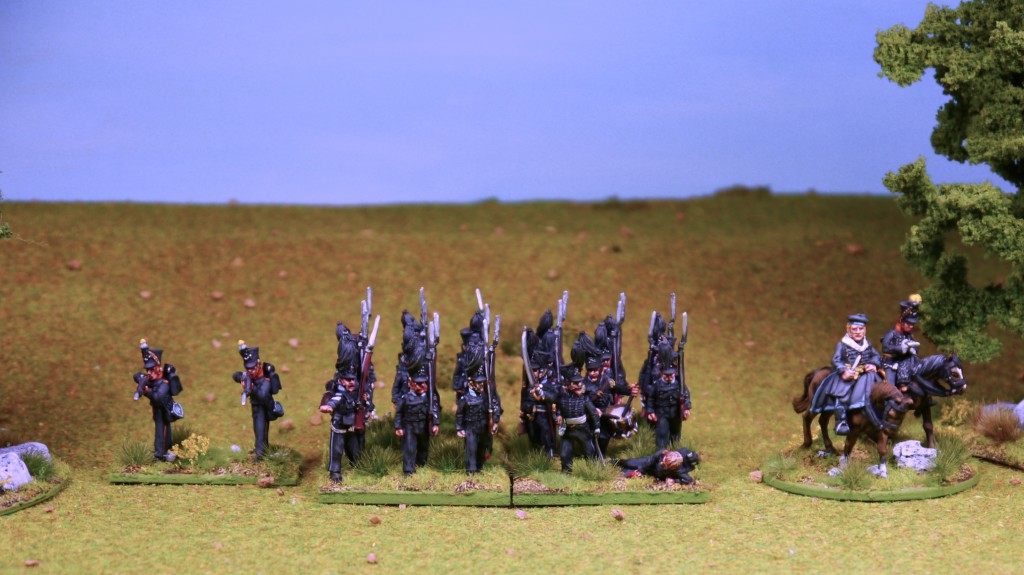 The Soldiers were an ebay auction from last year. Some of them were painted to a great standard, others looked as if they had been transported through Europe in a tabacco box and had to be repainted.The command unit was painted by Jim Bowen. 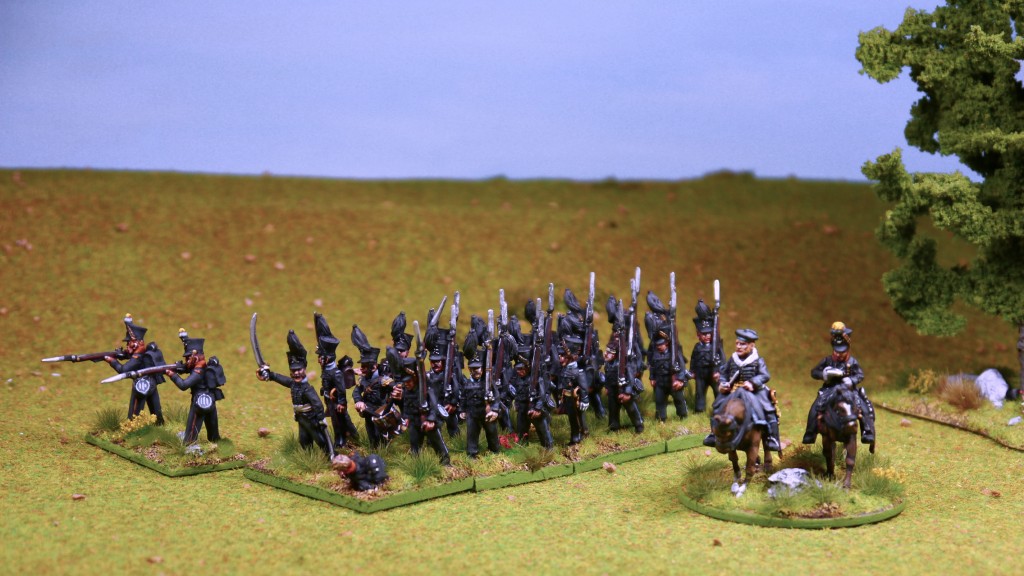 The Leib batallion didn’t sport a flag while they fought for the British, so I have added no colours. The batallion will be the elite unit of my Lasalle Brunswick Division with the Duke as its general. 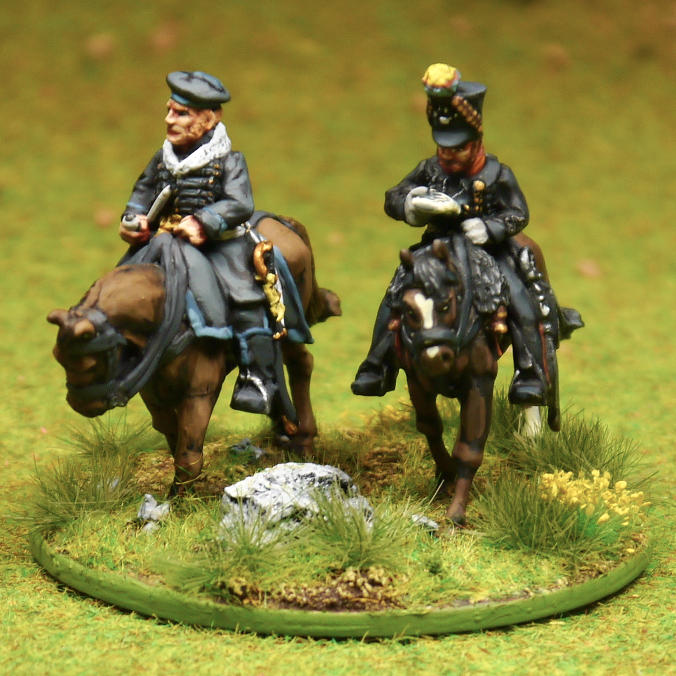 The Duke of Brunswick (Perry Figures)

The officer riding along with the Duke commands a light batallion and was part of the good ebay figures. Judging from the painting style I would say he might have been painted by Dave Jarvis, but I can’t say for sure since the seller I’ve bought the figures from couldn’t remember who painted them. 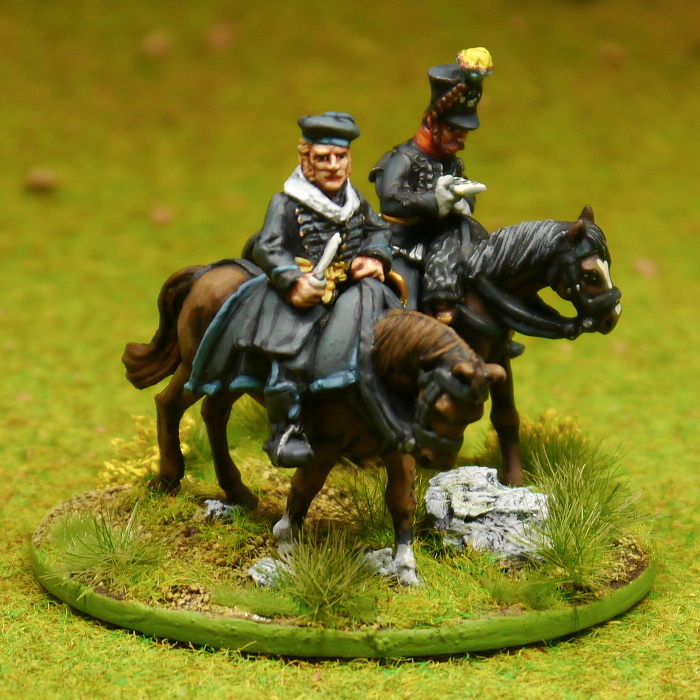 The Duke himself was painted by me, he’s the second figure I have painted this year. Two mounted figures (4 points) is far away from the painting-ratio I once had, but I’ll be lucky if I paint 10 points per month this year. Apart from that I have based a lot of figures which improves the ratio a lot. 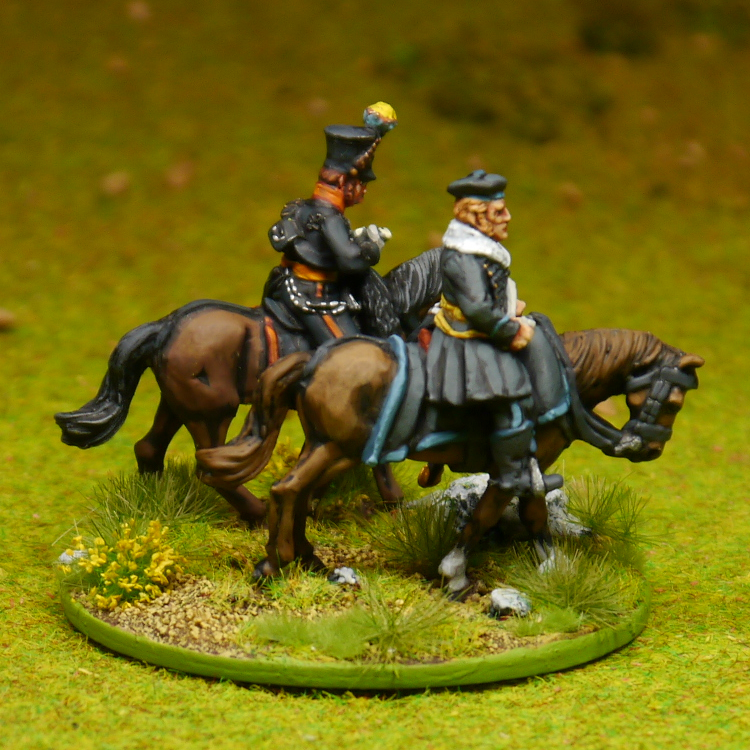 I really like the Brunswickers and I’m thinking about building the British light cavalry option with Brunswick cavalry, too. Well, I’ll keep you posted. Thanks for your visit and have a nice week!

I definitely needed some pause from red uniforms, so I’ve stalled  the British core army for a moment in order to start with the Brunswickers. Since it is not only the same project but really the same army I think this is a diversion I can allow myself.

Again my project seems to stand under a lucky star – the moment I had decided to do the Brunswick army a very nice bunch of figures came up for auction on ebay – and I really don’t know why, but nobody wanted to place a bid. So I got them for a more than fair price. Of course as always some minor amendments and repairs (and of course the inevitable rebasing) were due, but the quality of the painting is exceptional.

With this head-start I’m in the lucky position to have a unit of cavalry already finished. Well, here it is: 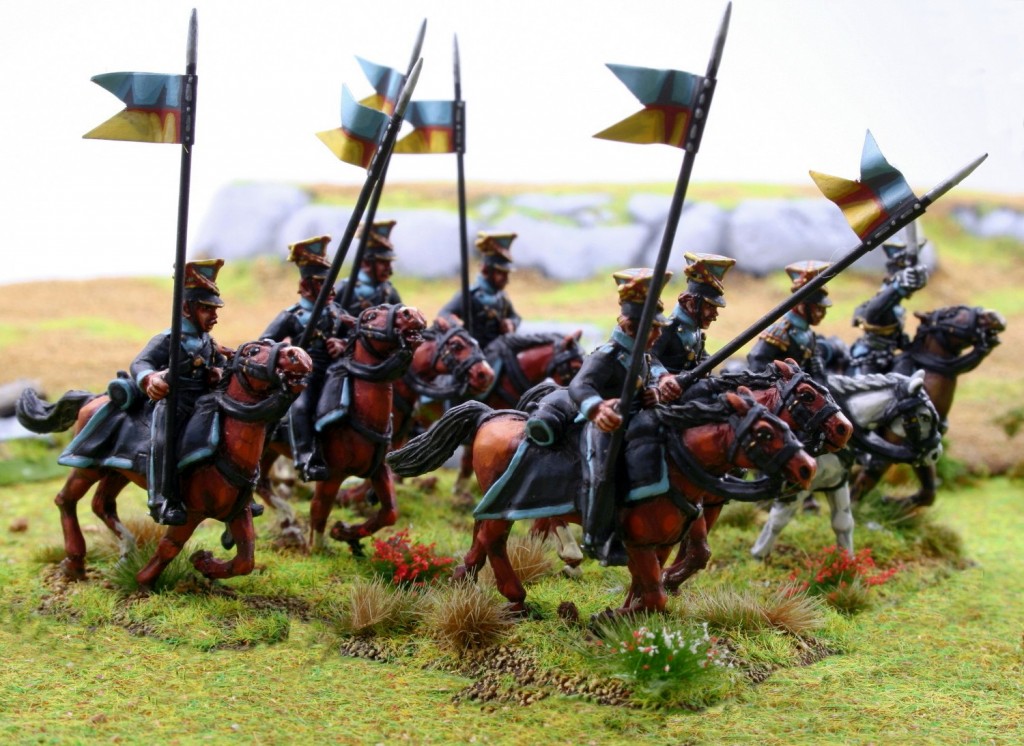 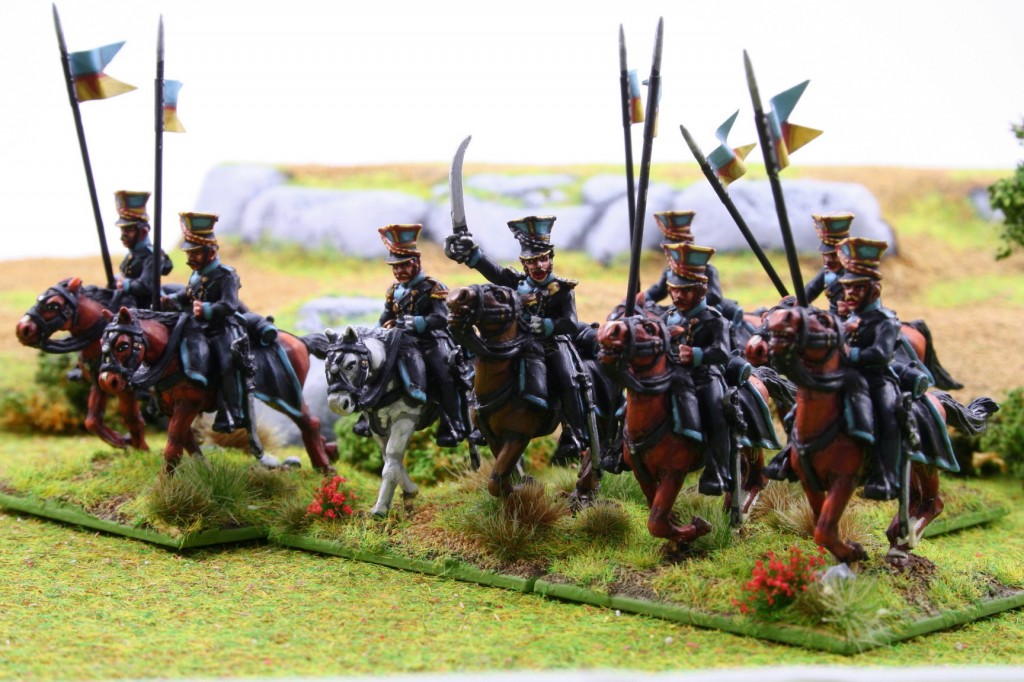 The Brunswick allied coningent in Lasalle consists of one light cavalry unit (now finished), two infantry units, one elite infantry unit and two skirmisher bases – one of them is now finished, too: 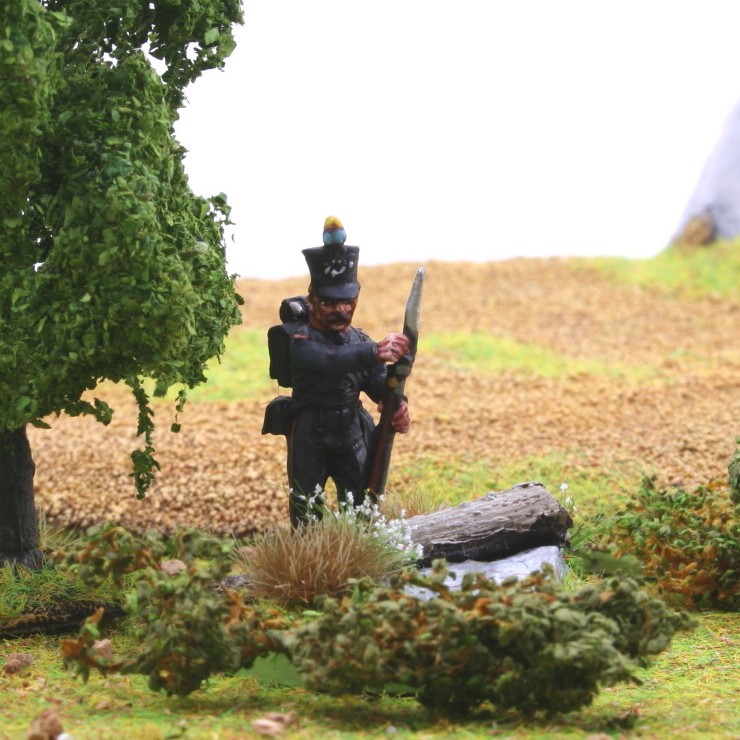 Lastly there is an artillery unit. Here I also was able to akquire two pieces of artillery:

As your skilled eye will certainly have detected right away, the right piece is horse artillery. Yet I’m willing to allow this latitude, as the Perries have only one variant each of foot and horse artillery, and it would look very dull to have three identical looking artillery crews. I’m now going to order a third piece and start on the infantry.

Have a nice weekend!